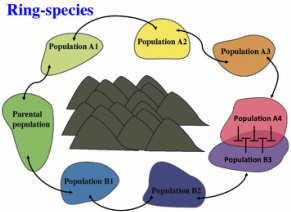 Ring-species are systems in which an ancestral population has diverged along two fronts surrounding a barrier of unsuitable habitat in such a way that upon reuniting, the populations at the termini have evolve some barriers for gene-flow.

Because they spread the process of speciation in space rather than time alone, ring-species offer unique opportunities to study lineage-divergence and the mechanisms underlying it. Unsuitable habitats promoting barriers to gene flow is a relatively pervasive phenomenon, yet capturing the process of lineage divergence in the landscape is rather challenging, and thus examples of ring-species are rare. The two the most compelling cases are both in animal systems (Ensatina salamanders surrounding the central valley in California, and the Greenish warblers around the Tibetan Plateau). 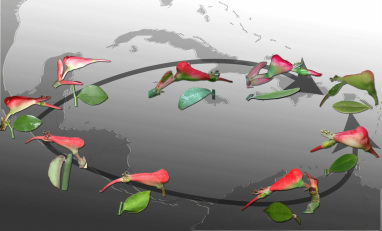 The Euphorbia tithymaloides species complex, with populations distributed around the Caribbean, is the only system in plants in which molecular data supports a ring-species pattern.

Current data supports two range expansion fronts from Mexico/Guatemala into the Caribbean, as shown in the figure.  Sequencing genome-wide data will enable us to look at the biogeography of speciation in this fascinating system.

Patterns of morphological variation in this system suggest that a parallel shortening has occurred in the inflorescences along both fronts.  We are investigating this hypothesis and its potential causes, stay tuned!