In the Pedilanthus clade of Euphorbia, the whole inflorescence is so modified that closely resembles a slipper, hence the vernacular name of this group: slipper spurges.  I estimated the phylogeny of the slipper spurges to look at trait evolution in this radiation within Euphorbia, and to test the hypothesis that the cyathium in this group is a key innovation. 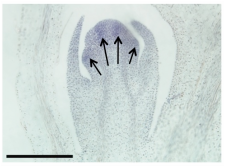 With over 2,100 species, Euphorbia is one of the most specious groups of flowering plants.  Its key distinctive feature is the cyathium, a highly modified inflorescence that resembles a single flower. While there is a huge diversity in cyathia and some of our most profitable plant crops are in this group (Poinsettia plant), very little is known about the evolutionary development of cyathia.

With Gerhard Prenner (Kew Botannical Gardens) I studied the role of the protein encoded by the gene LFY to study the floral-inflorescence boundary in Euphorbia.  Future directions involve a more directed approach to understand the copy number and expression profiles of genes that control symmetry and petaloidy in representatives of this group that vary in these traits.